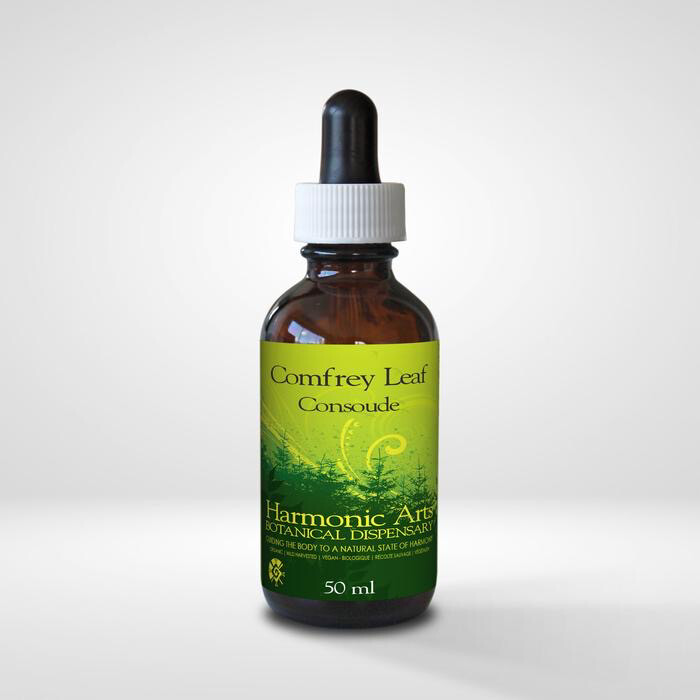 Use externally. Not for use during pregnancy or lactation.

Comfrey is a perennial herb native to Europe and temperate Asia and its use has spanned over 2000 years. It was traditionally consumed as a tea to help soothe coughs and was added to baths throughout the Middle Ages to relieve inflamed tissue. Comfrey contains tannin, mucilage, carotene, sugars, beta-sitosterol, vitamin B-12, protein, and zinc. Its remarkable healing properties are attributed to allantoin, a substance that encourages rapid cell growth and allows for regeneration in systems that have been traumatized or stressed. Comfrey is used externally as a poultice for sprains, swelling, and bruising, as well as lacerations or broken bones. It has the ability to draw the edges of a wound together, hence its nickname of ˜knit-bone™. It is excellent for soothing pain in any tender or inflamed part. The controversy over pyrrolizidine alkaloids which was a hot topic of discussion in the early part of this century does not apply to the common comfrey, Symphytum officinalis. Please read more below. Comfrey remains entirely safe to use externally or topically, and comfrey leaf continues to be used internally with some caution. The oil or extract can be used individually or combined with other herbs to make a salve or poultice.

In 2003, the discovery of pyrrolizidine alkaloids in some forms of comfrey cast a shadow over its historical use as a prime healing remedy. In 2004, Health Canada revealed that their concern targeted the alkaloid echimidine which studies have shown to cause liver damage and which is commonly found in two different species of comfrey, Symphytum asperum and Symphytum x uplandicum. These two species remain banned by Health Canada while common comfrey, S. officinale is acceptable for internal use as long as it is shown to be free of echimidine. Harmonic Arts sells the latter form of comfrey only.