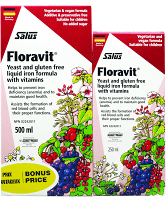 During pregnancy and breastfeeding, the body requires significantly more iron to meet the demands for the growth and development of a child1,2.

Iron picks up oxygen from the lungs, loads it onto red blood cells, and transports it to every cell in the body, including the womb. Our cells use this oxygen to make energy, and one of the highest demands for energy is growth of a baby in utero2.

There is significant blood loss during childbirth and in the following weeks, resulting in depletion of iron stores in new moms. During breastfeeding, a baby requires high amounts of iron to continue healthy growth and development. Interestingly, breastfed babies tend to receive the same amount of iron from mom, regardless of mom’s iron level7. This means mom preferentially gives iron to her baby trough the breastmilk, depletingher own stores.

Sleeplessness in new parenthood is normal, but iron deficiency is a separate and preventable cause of postpartum fatigue. Fatigue in breastfeeding women is significantly correlated with postpartum depression and early cessation of breastfeeding8.

The best way to understand your iron status is by having a blood test to measure something called ferritin, which is our iron storage. Ferritin is not reliable in the first six weeks postpartum, so it should be tested during pregnancy and repeated six to eight weeks postpartum.